Remember that first cookbook, Where the Heart Is,  by Karen Martini? It might have had a bit of a lame title but god it was good. I wanted to cook almost everything in it and pretty much have since it was published in 2006. The recipes are gutsy with the savoury ones invariably concealing a magical salt bomb. We’re talking feta, anchovies, olives or capers all over the joint. We’re talking love. END_OF_DOCUMENT_TOKEN_TO_BE_REPLACED

I’ve been reviewing salad cookbooks for The Real Review and Savour, Salads for all Seasons from chef, Peter Gordon has me entranced.

Let’s get one thing straight: these are no ordinary salads. They’re imaginative with a keen eye on texture and punchy flavours but, hey, Yotam Ottolenghi and Karen Martini have been flying those flags for years. These ones are different.

Gordon’s efforts at first, and even subsequent, glances might seem like a bit of a palaver. Only the first chapter, Simple Salads, actually is. And although these ones are straightforward, they’re never boring. Here he does a red salad with grilled red capsicum, radicchio, tomatoes, beetroot and pomegranate and sesame seeds all dressed with a tangy, chili-spiked vinaigrette. That pushes all kinds of buttons, right there.

The rest of the book is all multi-staged extravaganzas divided into chapters including cheese, seafood, grains, poultry and meat. There are so many upsides to these though; with many of them, you probably won’t need to serve anything else, they’re very forgiving of omissions and substitutions and they teach you little tricks that you can apply to other, more simple affairs.

Last week I did a killer miso-baked aubergine salad with dates, feta and tahini yoghurt but didn’t bother with the crisp buckwheat topping because I couldn’t be bothered and it still had crunch from pine nuts. Not only did my quicker version work a treat, it introduced me to his miso-baked aubergine which I’ll do again just as a side.

Here’s how you make them:

Stir to mix everything together then roast for about 30 minutes or more until caramelised, the skins have split and everything’s nicely juicy. 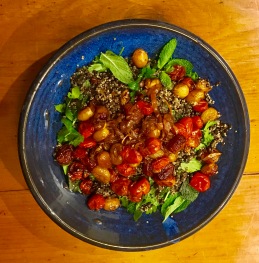 Utterly delicious on their own, this sweet, tangy combination that pops like bubble wrap would be great spooned over loads of things, not least, say, grilled haloumi. Or mixed through chick peas. I’d love to hear how you’d use this mix via the comments section below.

Peter Gordon is known for his mastery of ‘fusion’ cooking which can be a dangerous notion in the wrong hands. Relax, his are the right ones.

Rants and musings on food, books and travel

These #pepitas I roasted for 5 minutes unadorned then gave them another 5 with a whack of toban djan aka chili bean sauce and they’re addictive. Theoretically they’ll be sprinkled on top of salads etc but I think I’ll have scoffed them by 4 o’clock. ••••••••••••••••••••••• #chilibeanpaste #tobandjan